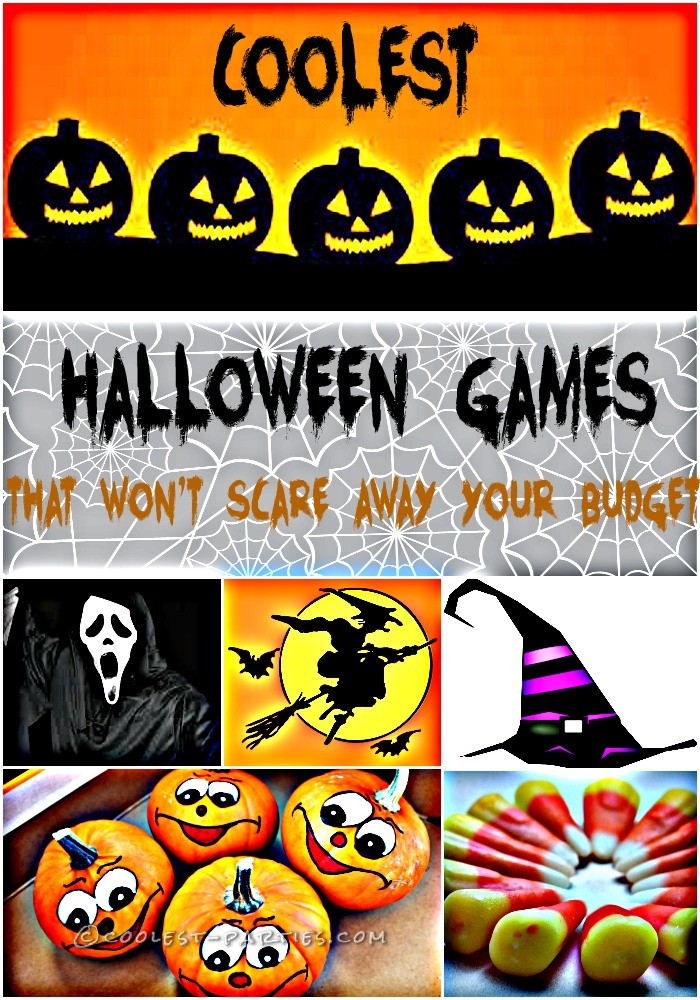 There are lots of great Halloween games you can play at your Halloween party. The games are most often for the kids, but grown-ups enjoy them just as much.

If you’ve got any cool ideas of Halloween games to add, take a moment and submit them below. You’ll be taking part in creating the Web’s ultimate Halloween party ideas resource that’s ALWAYS FREE for everyone to enjoy!

Same as Hot Potato, but with a creepy mask.

Here’s another one of those creepy Halloween games. Take different foods and articles and place them in bowls behind a curtain on a table (or in a dark room). The kids have to stick their hands in the food and guess what it really is. Before each food sample, tell the kid what they are about to feel. For example: Witch’s eyeballs (peeled grapes), Witch’s brains (cooked spaghetti noodles), a poor soul’s guts (canned spinach that’s very slimy and disgusting), Frankenstein’s fingernails (slivered almonds), Blood (warm non-set Jell-O), Witch Noses (cut hot dogs), dried ears (dried apples), bat toenails (seeds), liver (slab of jell-o), teeth (Popcorn kernels). You’ll get lots of “yuck!” and “gross”. You can get very imaginative with these type of Halloween games.

Set up a runway and have the guests strut their costumes as if they were real models doing the walk. Play a fun Halloween music, and prepare certificates for the different categories (Most Beautiful, Scariest, Silliest, etc.) and hand out the awards with a lot of fanfare. If the party is for young children, make sure to create enough categories so that each child receives an award. This is one of the most enjoyable Halloween games.

Divide the guests into two teams. Tie a plastic pumpkin bucket around the waist of one team member from each group and have them standing a few feet across from their team members. On the word, “go” have each team toss candy corn toward their team member wearing the pumpkin. Whichever team gets the most candy in the bucket during the allotted time wins!

Place two chairs at the far end of the room and place two empty Halloween containers on the chairs. Divide your guests into two teams and line them up in straight lines. Give everyone a straw and a witch, ghost, or other Halloween eraser. The first person in each line places the straw in their mouth and sucks in so that the ghost eraser sticks to the end. While continuing to suck in, they walk to the chair and drop their ghost into the container. They run back to the line and the next person goes. First team to finish wins.

Here’s another of those classic Halloween games. Divide the guests into groups of three or four. Give each team one roll of toilet paper (cheap toilet paper tears too easily, so use a name brand). One kid in each group is the mummy. When you say “go” the other team members wrap him/her up as fast as they can. First team to finish wins.

SAFETY: Make sure there is enough space for everyone to lay down otherwise there may be a few bumped heads.

This Halloween game is like musical statues but when the music stops you have to freeze in a zombie position.

Ghost In The Graveyard Halloween Game

One person is chosen to be the ghost. Then everyone hides when the ghost is counting to 40. When everyone is done hiding the ghost QUIETLY finds the first person and tries to scare them if she or he does they win and the person who got scared is the ghost.

This is a relay race where each guest runs with a miniature pumpkin under their chin and has to pass it along to the next child with out using their hands.

Split the guests into three or four groups. Give each group a broomstick and witch’s hat. Set a race course, and let the guests fly while they holler like witches.

Pin the Wart on the Witch

This game is similar to most classic party and Halloween games – musical chairs. Instead of chairs, you pass a witch hat around.

Glow in the Dark Hide and Seek Halloween Game

We live in the country so this game might not be as easy to play in the city. I get several glow in the dark necklaces. Everyone has to wear a glow in the dark necklace except the person designated “it” (usually the kids like to make my husband “it”). All the children must leave the necklace in plain view, no hiding under their collar or sweatshirt, etc. And it’s just basic Hide in Go Seek but in the dark with glow necklaces!

Before the party, get two balls of black yarn and tie a plastic spider to each. Divide your guests into two teams and have them line up in a straight line. The object is to be the first team to be tied together by the “spider web”. On the word “go” the first person in the line must pass the spider up one sleeve, across their chest, down the other sleeve to the next person, all the time keeping the string (and spider) in their clothing. The next person does the same thing until every team member is tied together. The first team done wins! This is one of those Halloween games that’s sure to supply lots of laughs.

Risk it or Pass it Halloween Party Game

You need a few containers (example: buckets, hollowed-out pumpkins, etc. – as long as nobody can see inside when they put their hand in) some sweets and some slime, eyeballs or other NASTY things, and a curtain or secret place to swap.

Set up: Get everybody who is going to do the “Lucky dip” sitting in a straight line. At least one adult needs to supervise the game. The adults must fill the containers with the items. One item in EACH.

Tips: Make sure no cheaters see the adult switching! To make it a bit better, there could be little messages and forfeits as well inside. For example: “You must pass on the next free turn before you risk it again”, “You have to give 5 sweets to the player on your left”, “Congratulations! You get to have 2 bonus sweets!”, etc.

Whoevers “it” has to be blindfolded and pretend to be a zombie… then have other kids walk around freely and the zombie has to catch 2 children (:

At your Halloween party this is one of those perfect games to get everyone up and about. First give each person a colour then tell them to find little slices of pumpkin all around the house (pumpkin slices that are painted in their given colour – you’ll have to create this beforehand). Once people find their pumpkin slices in their color, they go back to the starting point with all the pieces of the pumpkin and has to put the pieces back together to create the whole pumpkin. The first person to piece up their pumpkin is the winner. Play this game for a spooktackular Halloween..